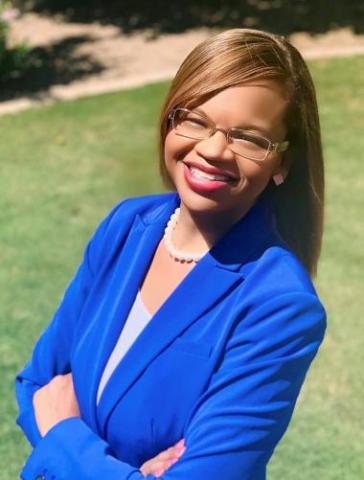 “Harnessing the Power of Diversity: Every Wildcat, Every day!”

Associate Vice Provost Banks works daily to incorporate Inclusive Excellence into the fabric of our institution, to make it diversity and inclusion the habit of Every Wildcat! Her efforts include aligning institutional goals through our Diversity Strategic Plan, developing the institutional D&I vision, and leading the Office of Diversity & Inclusion. Upon joining the University in October 2020, AVP Banks has launched a website for student demands, implemented required D&I trainings for all students which will fully launch in Fall 2022, and hired the inaugural HBCU Liaison which will strengthen our institutional partnerships with Historically Black Colleges & Universities.

AVP Banks serves the Wildcat community in the following roles and capacities:

Prior to joining NAU, AVP Banks served as the Director, Grievances and Appeals and Section 504 Coordinator for the University of Phoenix where she led initiatives to improve accessibility for campus communities with disabilities. AVP Banks’ also served as the Dean of Students & Director, Student Affairs & Academic Success at the University of Akron School of Law where she also served as Senior Lecturer. During her tenure at Akron Law, AVP Banks led developed programs to increase retention, enrollment, and academic success of diverse students. Dr. Banks developed the Pathways program which resulted in a contractual relationship between Akron Law and Central State University, the only Historically Black College/University (HBCU) in Ohio. In conjunction with the Akron Bar Association Diversity Committee, Dr. Banks increased diversity participation and membership with the bar association and led the Law and Leadership Institute Program at Akron Law.

A proud First-Generation student, Dr. Banks earned a Juris Doctor from University of Akron, School of Law, a Master’s of Education degree in Educational Leadership-Community College/Higher Education from Northern Arizona University, and a bachelor’s degree in Political Science from Cleveland State University. She is an active member of Zeta Phi Beta Sorority, Inc. which is one of the four historically African-American sororities. She has also acquired trainings and certificates from Cornell University in Faculty Institute for Diversity along with Association of Title IX Administrators (ATIXA), Section 504 and Decision Maker Certifications.